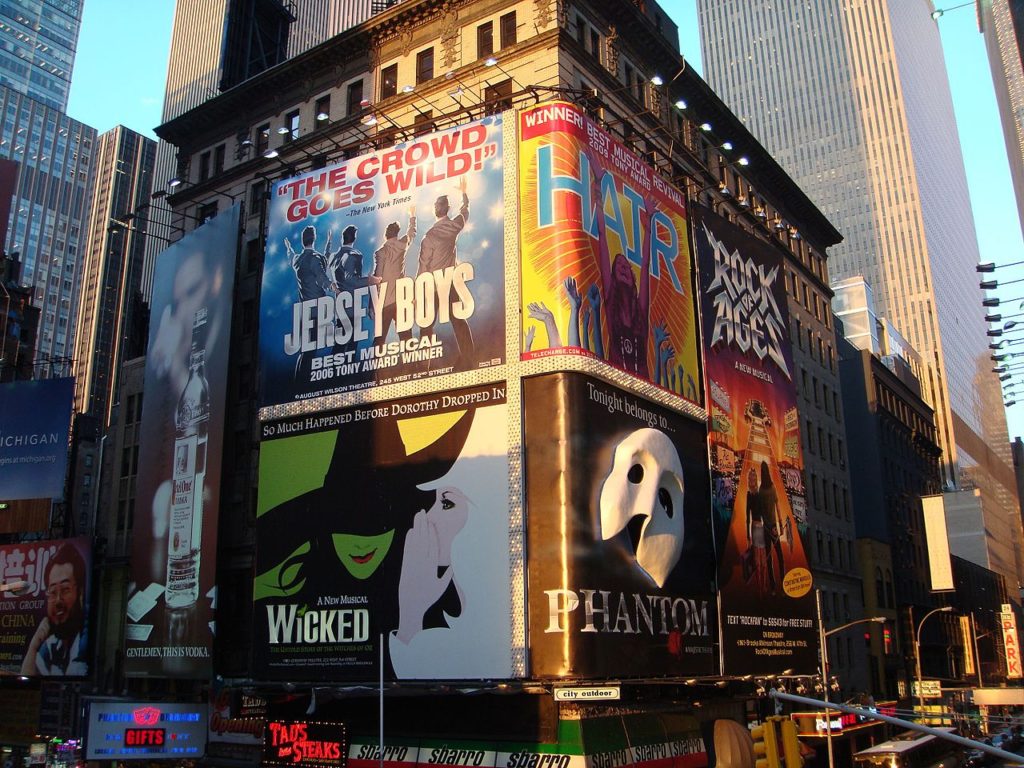 Attracting tens of millions of tourists every year, New York City is home to some of the most recognizable and entertaining attractions in the world. Here are its most iconic:

Broadway is the center of New York City’s art scene and is the most recognized theater district on the planet. No visit to the City is complete without experiencing the exciting entertainment available in Midtown Manhattan’s Theatre District.  Dozens of historic venues stage daring new musicals, long-running hits and captivating dramas every night of the week and theater goers by the tens of thousands line up to pay tribute to this fine art. Broadway, is the 41 professional theatres with 500 or more seats located in the Theater District and Lincoln Center along Broadway and is definitely one of the most popular tourist attractions in New York City. According to The Broadway League, for the 2015–2016 season (which ended May 22, 2016), total attendance was 13,317,980 and Broadway shows had US $1,373,253,725 in grosses. So come catch a show because Broadway tops the list of must do things in New York. Order tickets to any Broadway show at BroadwayShowTickets.com.

At the heart of New York City’s crowning jewel, Manhattan, sits Central Park an 843 acre plot of greenery that shines bright year round. At 6 AM the park comes to life with thousands of walkers, runners and bicyclers (and a few cars through certain parts). The park is filled with sights and sounds including: the Alice in Wonderland sculpture, the Belvedere Castle atop Vista Rock, and perhaps its most photographed location, Bow Bridge. There is a beautiful lake right in the center which features model sailboats and is called the Conservatory Water. It and its neighbor the Conservatory Greenhouse, are picturesque all year round.  There are easily locatable trails running all through the park that have lengths of 1.7 to 6.1 miles and are perfect for walking or riding a bike. Be prepared to hear music emanating from various parts of the park. This might be street musicians or the homage to John Lennon called the Imagine Mosaic.  Give yourself a gentle introduction to the city by exploring its beloved, natural gem. One walk through the park and you will understand why it is such a priceless commodity to New Yorkers and a must-see for tourists.

Perhaps New York’s most recognizable attraction sits in the South Hudson and is recognized worldwide as a symbol of freedom. “The Statue of Liberty Enlightening the World” was a gift of friendship from the people of France to the United States on October 28, 1886. The Statue of Liberty is more than a monument, she is a beloved friend, and a living symbol of freedom to millions around the world. The statue sits on Liberty Island at the entry to New York Harbor. This historic monument has welcomed so many generations of hopeful Americans to the US shores. The American Family Immigration History Center at Ellis Island (which is right next to Liberty Island), contains more than 25 million Port of New York passenger arrival records and 900 ship pictures circa 1892–1924. Although it may New York City’s most familiar landmark, it is the easiest one to overlook, since it’s only accessible by boat. Ferry leave from lower Manhattan and run regularly during daylight hours.

For nearly than 40 years, from its completion in 1931 until the building of the New York World Trade Centers, New York’s Empire state building was the tallest skyscraper in the world. Located on Fifth Avenue between 33rd and 34th streets in Manhattan, it is a modern marvel of construction. It has a roof height of 1,250 feet (381 m), and with its antenna spire included, it stands a total of 1,454 feet (443 m) high and has 102 floors. Its name is derived from the nickname for New York, the Empire State.  As one of New York’s top tourist stops, The Empire State Building is more than a spectacular view, it’s an immersive experience inside a world famous landmark. In addition to the 86th floor Observation Decks (the height is 1.050 feet), any visit must include the newly restored lobby with its stunning art deco ceiling murals, the historical Dare to Dream Exhibit, and the Sustainability Exhibit. Go here to learn more about the Empire State Building.